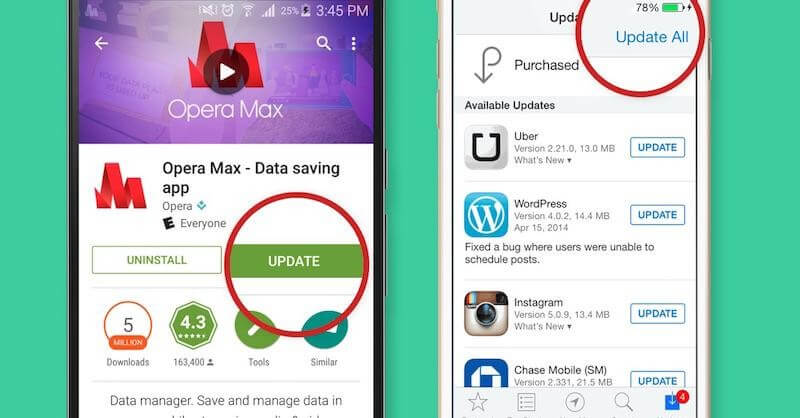 App Maintenance: Why and How Often You Should Update Your App

Over the last 8 years, the world’s 2 most popular mobile OS (iOS and Android) have both had a catalog of more than a million apps launched for every possible task you can imagine.

These apps also have been constantly adding new features and integrations besides fixing bugs and performance improvements forcing users to update them often. Every time an app is updated the user has to spend data & hence some of them may not like constant updates.

This is a double edged sword as a section of users tend to dislike the apps which constantly require updates and eat up their data because they probably pay a lot for data services, while other section of users really appreciate newer features in apps.

So the question is “How Often Should You Update Your Mobile App?” and who decides the frequency of the updates? The easiest answer is to define the purposes of app updates well in advance.

Whether you want to add features, fix bugs and improve performance or use app updates for marketing purposes (Yes, you read that correctly). Once the purpose(s) of updates are decided, the update schedule becomes easier to deploy and the scheduling of updates becomes clear.

Most popular apps update almost once a week or 4 times a month and since they are really popular they can get away with that kind of schedule (consider instagram, facebook, messenger, etc) because people won’t mind them but not all app developers will have the same liberty. We can list the reasons that warrant an update and then define preference of each of them.

To put them in perspective we can quickly list the most common reasons for app updates:

This is an unavoidable and expected reason for app updates. The developer can however keep a weekly or fortnightly update pattern so that the users are aware and can expect the app to be updated on a single day of the week every time rather than any random timings.

The image is taken from Developer Console for an app developer where the app is improved taking by implementing the user feedback.

Apps can receive a design overhaul or UX/UI refresh when the developer finds a better way of interaction with the app which might lead to ease of use or increased engagement. It can be due to the company logo changes or additional services, products being offered by the company.

Sometimes users suggest a great tweak or useful feature(s) for an app and implementing the suggestions may lead to increased engagement by the users besides giving them the assurance that the developer is responsive and values their feedback.

This not only makes the app better but also guarantees a sustained user base and loyalty of the users. Happy users might even recommend the same app to other friends or acquaintances or on the public forums on internet. They could share this via social media channels as well. All these efforts would lead to an increased app downloads.

Continous app updates can reassure the users that their beloved app is actively managed and the developers have not abandoned it. This is a big reason why anyone would keep using the app and would actively recommend it too.

With so many apps available in app stores the users are spoiled for choice. There are several apps to accomplish the same task and most users would even install more than 1 app for the same task. (Twitter, Facebook, Multiple camera apps are just a few examples).

Every time an app is updated the user gets a notification to update it and gets his/her attention. A lot of users have the apps installed but never tend to use it after a while. App updates make them realize that they have the app still on their device and as such it can be used for promotion too.

New software or hardware capabilities would necessitate the app to be updated to achieve newer things that weren’t possible earlier on. Android’s Nougat update added split screen feature, iOS 10 update added the force touch and apps were updated to make use of these new software and hardware feature sets.

The image shows Quick actions added to Youtube app on iOS via an update to make it compatible with Force Touch.

All of these factors would necessitate app updates at different schedules and as long as the app lifecycle is predefined and followed as per the schedule with the flexibility of user feedback, app updates can be in control of the developers.

As such there is no specific timeline or industry standard on app updates but still common practices and market dynamics specify what can be considered an acceptable app update cycle. At the end of the day it’s the developer’s call on how often the app needs to be updated and it will depend on their team size, the resources they can allocate on a particular app besides many more factors.

How often do you update you app? What strategy do you follow for updates? Share your ideas in the comments with us.

What Is Geofencing? How Does It Work?